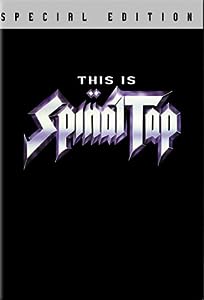 Cover of This is Spinal Tap (Special Edition)

Over the past couple of weeks, I’ve put a few comments on Twitter about 2011 and how I hope to use it as an excuse to mention Nigel Tufnel.  Who the heck is Nigel Tufnel you are wondering?  Well, for those of us of a certain age, as in over 40, remember him as the lead guitarist for the band Spinal Tap in the mockumentary “This is Spinal Tap“.

The reference? Nige has a lovely scene where he talks about his guitar and the mega volume he can get because he’s turned his amp up to 11.  Here’s the dialogue:

There are some other hilarious bits, tongues get planted firmly in cheeks (the band hails from Squatney!) and it spoofs metal rockers to a “T”.

Well, there’s the scene where they draw the plans for a stonehenge stage show, which when erected is substantially smaller than anticipated because they use inches instead of feet in their measurements.  They could have paid closer attention in school, I suppose.

Oh, who am I kidding?  There is no link.  I just wanted to have fun with it.

I, for one, will be channelling my inner Nigel and will do my best to turn things up to 11 next year, when I need it.

I’ve just returned from a short trip to New York City, my first trip there....

What does travel teach us about learning?

I’ve recently returned from a trip to Greece and thought it would be fun to...

Editor’s note: This is the first in a series of posts on the international flavour...